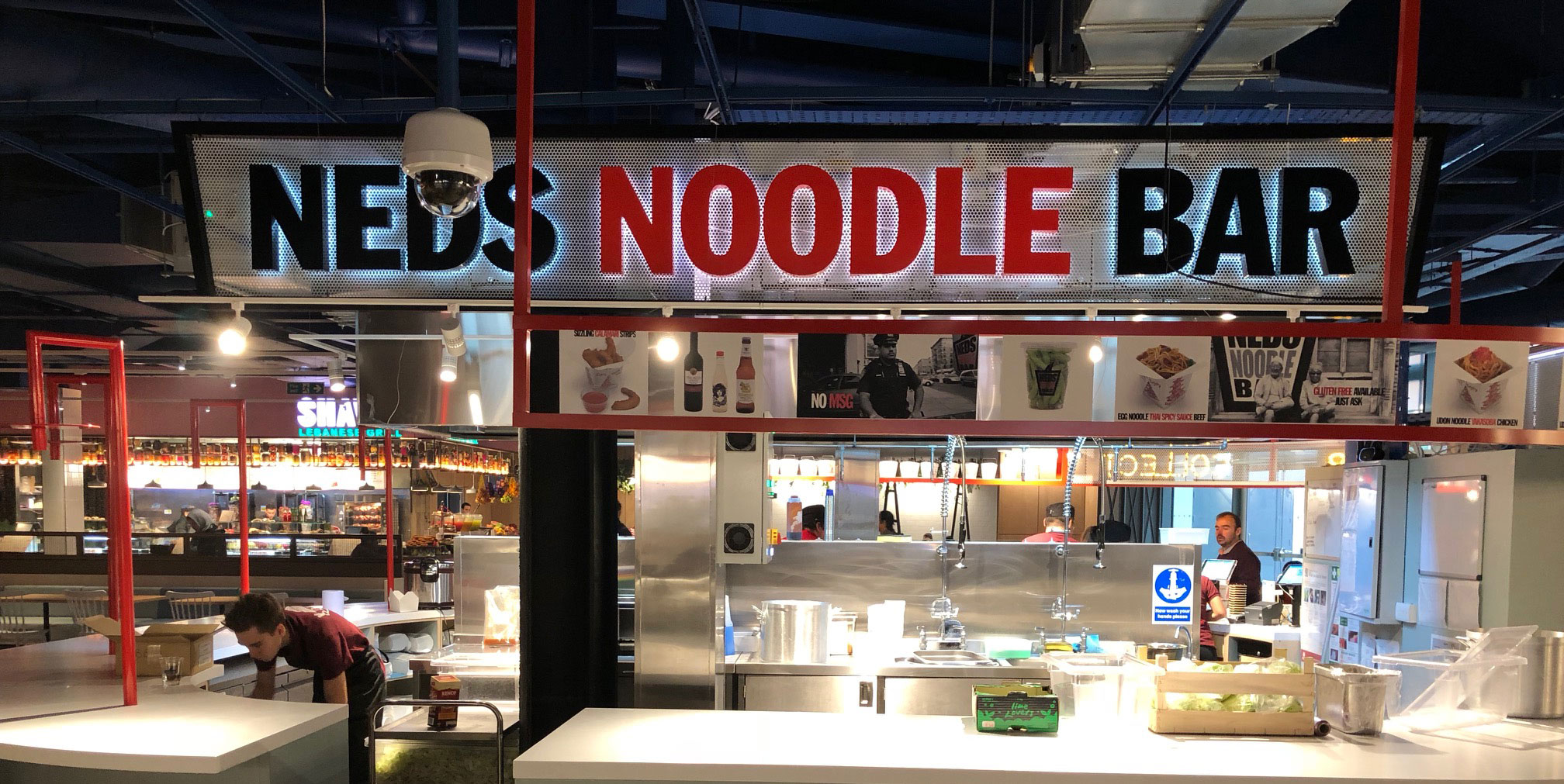 This year Neds Noodle Bar built its 5th restaurant. It was in a new redevelopment at Oxford’s Westgate. Land Securities and the Crown Estate has decided on a 4 year refurb at a cost of £450 million pounds.

We were approached in November 2016 to do a kiosk in the Westgate Social a room with 6 different kiosks and communal seating.

As with shopping centres nowadays you have to have a bigger draw than just shops and places to eat so communal spaces are dreamt up which hopefully will attract more visitors.

Our kiosk K4 was designed by Brown Studio who were a small specialist practice working out of North London. We had decided to use finishes and colours that were used in other restaurants of ours but we were also looking at ways to move forward with the environment in mind.

Our first major change was to not use gas anymore but use induction cooking. We had tried the new woks at another store which took time to get use too. Induction woks are powerful and if you lift the wok off the Steele holder it loses power. Tossing the food was taking on a new meaning unlike the gas powered woks.

The kiosk environmental solutions as in air extract were heavily determined within the lease. There were no short cuts. The canopy extract duct smoke control and odour control came in at a mouth watering £44 000.00 ! In fact the total spent on just the kitchen alone was £109 000.00 and this is for a 400sqft kiosk. Building restaurants is not for the faint hearted. Expensive legislative and in our case a deadline date that was as likely to happen as Arsenal winning the league again.

Building began in September. A five week build. Opening date for the centre was October 24th 2017. For everyone. Not opening on time would produce heavy penalties. Our first problem was trying to deliver our goods on site. With over 100 shops and restaurants being built the security was immense and huge lorries were being wrapped around Oxford to gain entrance on site. My BT engineer finally had a successful visit on his fifth appointment as he was unable to get on site. Thomas our new manager for the store and myself carried all the duct work on site from the A34 and our Corian bar top was lifted from a loading bay almost half a mile away. Finally we had to stock the kiosk with food and drink which again became problematic as as the centre was about to open and all the builders were decamping with all their goods and waste.

We were pretty much ready to go by the 23rd. The only small piece of kit that was missing was the electrics to have the final fix. From 9pm until 11am on the 24th six very tired electricians climbed over our kiosk to implement lighting epos tills credit card machines fryers induction woks and our very expensive extract system linked up with the landlords panel just invade there was a fire.

No sooner had we pulled on our Neds T shirts and opened up the noodle boxes to be blanched and cooked the customers started trickling in. And the trickle became a line and the line became a crowd and the crowd became a stampede so we had to close to calm everyone down for an hour.

Six weeks in we are the busiest Kiosk in the Social. We are in 5th position with taking the most money per square foot in the centre and we could not have wished for a better start.

Thank you Irit for your design Thomas for your strength and Natalie for her incredible direction and thank you Camilla at DCL for giving us the chance.

Unless you try you will never know.